The User Groups tab provides a set of options that, if configured correctly, assign the user to groups in the application based on the user’s groups in the Identity Provider. The constraints for creation of new users can be set in this tab. With the options given in this tab a user can be assigned to application groups in a number of ways. User’s group membership can be assigned by default after successful SSO, by mapping group attributes to application groups in the Manual Group Mapping section and also by creating the Identity Provider groups received in SAML response on the application’s side and then assigning the user to the created groups.

Let’s consider a scenario where we use Okta as an Identity Provider. The SAML response from Okta does not contain any group attributes by default. In order to receive group attributes from Okta, the Group Attributes Statement section in the Configure SAML tab needs to be configured while creating a SAML application in Okta’s admin console :

The group attribute returned in the SAML response can be viewed by clicking the Test Configuration button in the Configure Identity Provider tab : 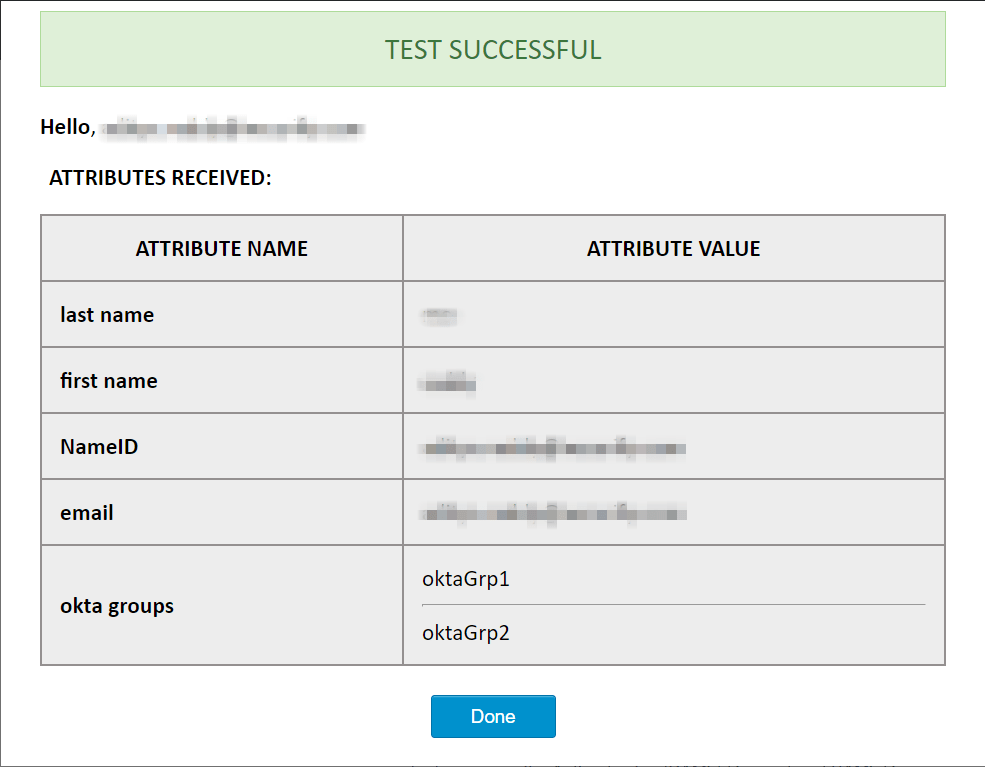 The User Group tab has the following features:

This option is used to restrict the creation of a new user in the application. Only users that are already existing the application’s user directory will be allowed to sign-in. Existing users are not affected by this option. If a new user attempts SSO and this option is checked, the user is redirected to a login page with the error “We couldn’t sign you in. Please contact your Administrator.” irrespective of the validity of the user’s credentials.

If new user creation needs to be disabled then the Disable User Creation option needs to be checked. Now SSO will not be successful unless the user’s profile already exists in the application. If an external directory is being used as a user store, then the behavior of this option depends on the access permissions that the application has for that directory. The recommended setting for this option for each type of permission is :

This option can be used to set the type of users that will be assigned to the configured default groups after SSO. Default groups can be assigned based whether the user is an existing user or a new user. The possible settings for this option are :

There are some options that are common to both methods of group mapping. They are explained below :

Let’s consider a scenario in which the user has been removed from group-B in the Identity Provider, but still a member of group-1 and group-2 in the application. Now when the app receives a SAML response, it finds only group-A in the group attribute. The app retains the user’s membership in group-1, but removes the user from group-2 as the mapped Identity Provider group group-B was not found. The app will remove users from application groups that have been mapped but the corresponding Identity Provider groups have not been received from the Identity Provider. Of course this is only possible when the Disable Group Mapping option has not been checked. If this option is checked, then the user will neither be assigned to new groups nor removed from existing groups.

The app provides the following options in the Manual Group Mapping section :

This method of group mapping is recommended for either of the following scenarios:

In order to use this method, then the Group Attribute field is required. The app will assign users to groups or create new groups based on this field’s value. The user will be assigned to the application groups that have the same names as the groups in the response. If such groups don’t exist, then the groups are created. The app provides an option to disable the creation of new groups. The app provides an option to choose whether the existing group memberships of a user will be retained. Both these options are discussed in detail in the next section.

Let’s consider a situation where the groups returned in the response are group-A, group-B and group-C. Let’s say the application already has a group named group-C. After the user performs SSO, the user will be assigned to group-C. Since there are no groups named group-A and group-B in the application, these groups are created. After this the user is assigned to these created groups. The effect of the options in this section on the flow of this method of group mapping are explained in the next section.

The options provided in this section are :

Group mapping considerations if an external user directory is being used

In the case of an external directory being used for users, group mapping functionality depends on access permissions of the directory. The recommended settings for each type of permission are :